Should we be worried about the high vacancy levels in living quarters?

To really keep track of the balance of the housing supply-demand system in the market, the number of households should be compared with the existing stocks of residential housing and service apartments released by the National Property Information Centre.

This was written to response to the article "The problem of 1.9 million unoccupied homes".

Key findings from the Population and Housing Census of Malaysia 2020, published by the Department of Statistics Malaysia (DOSM), show that living quarters in Malaysia amounted to 9.6 million in 2020. This included 7.7 million occupied dwellings and 1.9 million vacant units. Of these vacant units, 22% were in Selangor, 13% in Johor, 8.5% in Perak, 8.2% in Sarawak, 8.1% in Sabah etc. 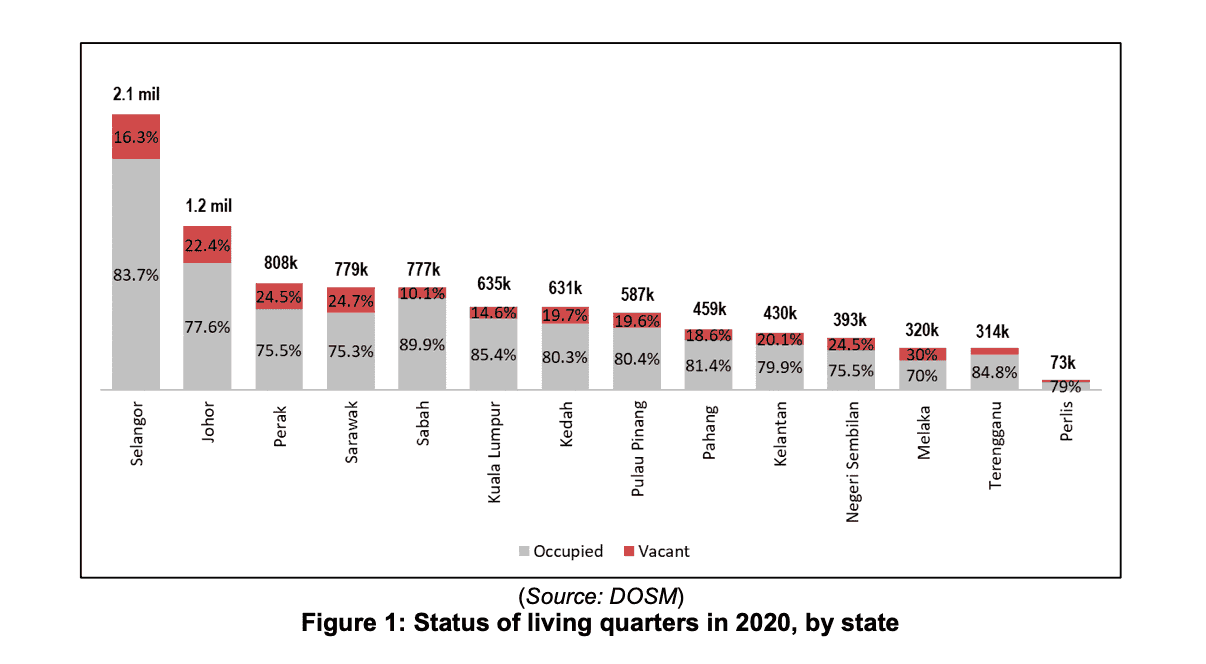 At first glance, the number of vacant units is whopping as it shows a steep increase from 700,000 in 2010. Compared with the number of households, there were 9.6 million living quarters against 8.2 million households in 2020.

Except for Perlis, every state showed a higher number of living quarters than the number of households. This not only gives rise to the question of a housing mismatch in terms of product, location, and pricing, it also leads to a bigger concern with regards to housing affordability, as houses in the country are oversupplied but people can hardly afford one in actual fact.

As shown by Bank Negara Malaysia (BNM) in the 2H2021 Financial Stability Review, to afford a house priced up to RM300,000 – which is the maximum price of affordable housing in Malaysia – a household needs to earn at least RM8,333 per month. Unfortunately, as much as 76% of Malaysian households earned lesser than the stated income in 2020.

However, one should realise that the term “living quarters” used by DOSM refers to a structure that is separate (if it is surrounded by walls, fence, etc, and is covered by a roof) and independent (if it has direct access via a public staircase, communal passageway or landing, without passing through others’ premises).

So, to really keep track of the balance of the housing supply-demand system in the market, the number of households should be compared with the existing stocks of residential housing and service apartments released by Napic.

For example, there were 6.3 million residential houses and service apartments recorded in Malaysia as of 1Q2022. With a supply-demand ratio of 0.77, and a saturated threshold set at 1.1, the overall housing market in the country is still far from an oversupply.

While some prime property market areas like Penang (1.11) and Kuala Lumpur (1.08) could have shown a ratio that exceeds or nears the saturated threshold, other primary property market areas like Negeri Sembilan (0.97), Johor (0.95), and Selangor (0.94) have yet to approach the “near-to-saturation” status. This implies that the number of living quarters cannot be simply used to reflect the housing supply-demand status of the country.

Besides, the data on vacant living quarters by main reasons of vacancy (i.e, newly completed/for rent or sale, for repair/renovation, holiday resort/transit, homestay, seasonal workers quarters, dilapidated) should be interpreted with caution, as the number of vacancies is based on filed observations when the survey is conducted, which tends to be less than the actual number of vacant living quarters.

For example, 58.7% of the vacant living quarters in Selangor, or 197,065 units out of 288,902, are identified as vacant due to being “newly completed/for rent or sale”. This figure can only provide an idea of the status of vacancy, and cannot represent the true scenario of the state as the total number of vacant living quarters in Selangor is recorded at 343,562 units.

Also, this figure cannot be used to support statements which claim that the housing market is overpriced or less affordable to mass buyers as it gives no information on the breakdown of housing types (formal vs informal), pricing (affordable vs high-end), or ownership (purchased vs unsold) that contribute towards vacancies in living quarters.

To better gauge the status of the housing supply-demand in the country, statistics on residential and service apartment overhangs should be referred to and further cross-referenced with the annual stock growth in which overhangs provide an indication on housing demand in association with the varying economic performance, housing preferences, market sentiment, housing affordability, credit accessibility etc while the annual stock growth represents the number of completed units added into the existing inventory stock in a particular year.

As shown in the Figure 2, the overhang tends to become more severe whenever there is an excessive supply into the existing inventory stocks. The spike of residential overhangs in 2017 and service apartment overhangs in 2019 is clearly the result of an excessive supply of residential housing in 2016 and service apartments in 2018. Though the supply has been reducing since then, a general market slowdown due to the global economic downturn has affected the property market sentiment, which limited the market absorptivity thus leading to an ever-higher number of overhangs.

By studying the breakdown of overhangs by price range for the past five years, one finds that the majority of overhangs in residential housing are concentrated in products priced RM500,000 and below.

Meanwhile, the majority of overhangs in service apartments are contributed by products priced RM500,000 and above.

This indicates that the impact of overpricing on service apartment overhangs is more severe than that of residential housing where the supply has been gradually adjusted to meet the demand of mass buyers. A high number of overhangs in the affordable housing segment (RM300,000 and below) is likely the result of reduced housing affordability due to the depriving household income, which is in contrast to overhangs in service apartments which are likely due to a product mismatch in terms of pricing.

Realising that service apartments – a form of residential property built upon commercial titled land – has become a common property type for most of the newly launched projects today, it is necessary to formulate a price index for service apartments in order to continuously monitor its pricing development and to serve as a benchmark against households’ affordability, so as to ensure the provision of a more accurate and reliable statistic that better reflects the housing delivery system in the country.

Concern over parents going into debt to buy their children homes

Rental demand on the rise amid inflation, increase in OPR